In the autumn of the year of the first London Olympics, Britain was still celebrating the overwhelming success of their summer Games. But as the nights drew in and the dust settled on the deserted running track in the White City Stadium, public attention moved on impatiently to fresh news stories. One of them was the larger-than-life presence in London of an Australian King.

THE LONDON OLYMPICS of 1908. Great Britain and Ireland won most of the medals, but very few friends… read more

Both the Australian Cattle King and the King of England had attended the Olympics.

Edward VII, King of the United Kingdom and the British Dominions and Emperor of India, had finally inherited the throne at the age of sixty in 1901.

By 1908 his playboy lifestyle was catching up with him. He was short of breath as well as stature, very stout, pop-eyed and looked increasingly like a bearded version of his late mother, Queen Victoria.

Nevertheless, he was a surprisingly effective and highly popular figurehead for the largest empire in history.

The self-made Cattle King had run away from home in South Australia at the age of thirteen and started work as a sheep herder with a one-eyed horse he had bought himself and five shillings change.

By the time he brought his family on his first visit to the mother country early in 1908 he was fifty, in the prime of life, and already the biggest private landowner the world had ever seen. In the dawning age of newspaper celebrity, he quickly became almost as recognisable and popular as the King Emperor.

The distinctive figure of the Cattle King drew crowds wherever he went in London, partly because his preferred means of navigating around the city was on the driver’s seat of the nearest two-horse double-decker omnibus.

So impressed was he with the horsemanship of the bus drivers that he publicly offered a job and free passage to any driver who wanted a second chance and a new life in Australia. 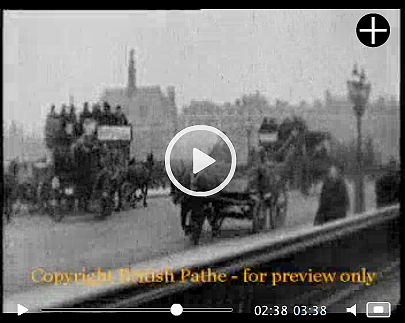 London in the summer of 1905. Just one of the many glimpses of the world we can offer you from the British Pathé archive.

The tall Australian in his dented hat also attracted the attention of some of the wealthiest businessmen of the day, who stampeded to invest in the vast beef-raising empire the Australian was building.

So while his wife and daughters made the most of the huge new department stores of Oxford Street and the theatres of Shaftesbury Avenue, the Cattle King made friends with bus drivers in dilapidated East End stableyards and deals with business magnates in oak-paneled City boardrooms.

By the time he left England in March 1909, the Cattle King had accumulated a wide range of aristocratic friends and business investors, and a menagerie of pedigree horses, ponies and cattle to improve his breeding stock to take home with him.

In The Song of the Butcher Bird he has also acquired a trio of young English people to take back to Australia under his wing.

Only one of these three young protegés is eager to be heading to the far side of the world. The other two travel reluctantly, one of them under protest.

As his wife warns him, Sid Kidman understands cattle and horses much more thoroughly than he understands people, and he has set in motion a chain of events that will transform the lives of a great many people on both sides of the world, for better and worse.

Bigfella Kidman King of all Adelaide